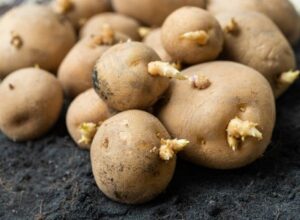 The potato is a fundamental food throughout the world, since it is consumed more than others foods such as wheat or rice.

Even being such a consumed food, people do not give importance to its conservation. We haveto keep them in a cool, dry, dark place and, something that not everyone knows, away from the onions because they emit a gas that makes the roots come out faster. In addition, if we not keep them well, solanine can appear, which is a toxic compound that is naturally present in potatoes, but in very low levels. When potatoes are exposed to sunlight, the ripening process is accelerated and the concentration of solanine increases, which can cause health problems when consumed.

It is very easy to know if the potato is in bad condition because sprouts appear and some parts of the potato acquire a greenish tone. But if the sprouts are less than one centimeter there is no problem in consuming them, but if they are bigger, precautions must be taken according to the OCU. In addition, a high concentration of solanine makes the potato taste bitter. So if we notice any of these “symptoms” it is better to discard teh potato because it can cause problems in our health, such as stomach aches, headaches, vomiting, diarrhea or sore throat.

According to several studies it has been concluded that the amount of solanine depends also on the potato variety and its ageing, in addition to the way it is stored. It is therefore advisable to buy only potatoes that will be used in the next few weeks.